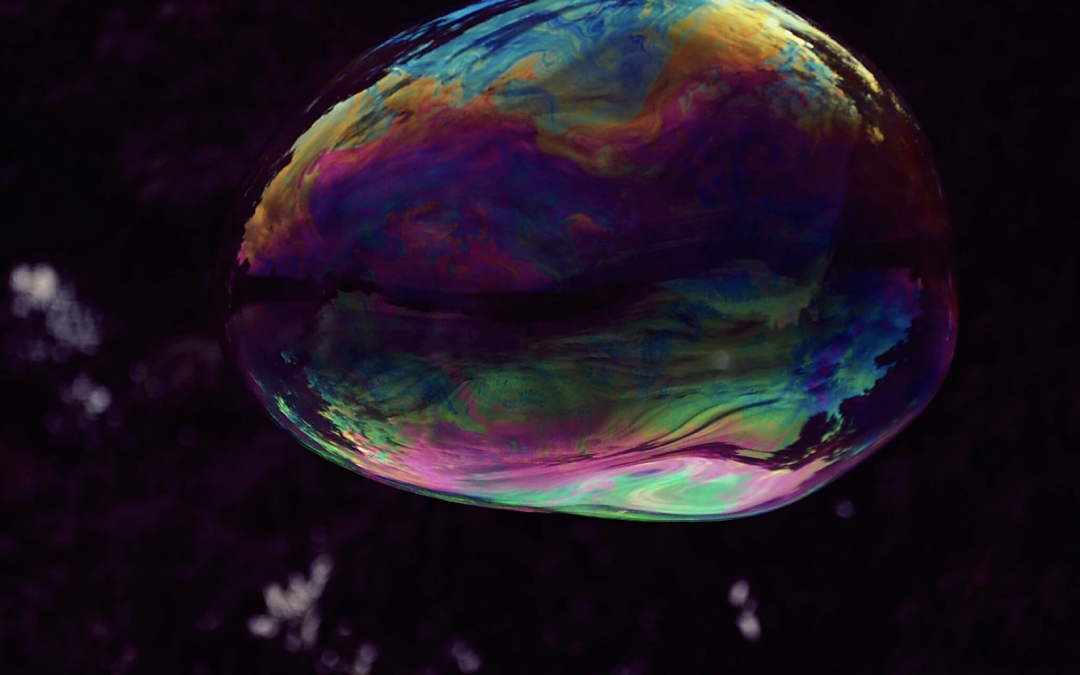 All bubbles, regardless the type, have one thing in common – at some point, they pop. And when they do, avoiding their path of destruction is wise. Bubbles within the financial markets have been documented as far back as the 1630’s when the Dutch experienced “tulip mania” causing one of the first financial market bubbles[1]. Since then, the world has continued to bear witness to multiple types of extreme asset mispricing. For this month’s blog, we want to dive into the definition of a bubble, its characteristics, and provide a line of thinking one may use when they begin to hear their cab driver discuss “the new hot thing” in the markets.

A financial market bubble can be defined as “an economic cycle characterized by the rapid escalation of asset prices followed by a contraction.”[2] Said differently, a bubble in the financial markets takes place when a certain asset’s price (e.g., stocks, bonds, real estate, commodities, etc.) increases at such a rapid rate it significantly exceeds its perceived intrinsic value[3]. The process then reverses as the market begins to recognize the extreme overvaluation of said asset and thereby drives its price back down to or below its perceived intrinsic value. For example, in 1720, Great Britain experienced the “South Sea Bubble” whereby the South Sea Company’s stock price increased by more than 700% within six months. The extreme price increase was driven by deceit, corruption, and bribery, and by September of 1720 the price had plummeted almost -83%![4] The reason and ramifications of this bubble were immense and caused significant damage to both individuals and the British government.

Bubbles and their characteristics

Defining a bubble only goes so far, and therefore we must examine their characteristics in order to truly understand how bubbles are formed. Based off our definition, bubbles have three core characteristics: 1.) a bubble is tied to an asset (e.g., a stock, bond, commodity, or even an entire market); 2.) the price of said asset must grow well above its perceived intrinsic value; 3.) at some point the price needs to reverse and decline back to or below its perceived intrinsic value. Understanding these core functions is important but knowing what leads to such price volatility is paramount.

Instead of trying to formulate the potential causes of a bubble’s increase and decrease in price, we will lean on Robert Shiller[5] for his explanation:

If asset prices start to rise, the success of some investors attracts public attention that fuels the spread of enthusiasm for the market. New (often less sophisticated) investors enter the market and bid up prices. This “irrational exuberance” heightens expectations of further price increases, as investors extrapolate recent price action far into the future. The market’s meteoric rise is typically justified in the popular culture by some superficially plausible “new era” theory that validates the abandonment of traditional valuation metrics. But the bubble carries the seeds of its own destruction; if prices begin to sag, pessimism can take hold, causing some investors to exit the market. Downward price motion begets expectations of further downward motion, and so on, until a bottom is eventually reached.[6]

The feedback loop described by Shiller is simplistic and powerful. In a succinct manner, he provides further characteristics of the inevitable rise and fall of a bubble. He explains the increase in an asset’s price starts with the success of others, which then drives others to participate in their success. As demand increases, prices begin to rise at a quicker pace, leading others to believe the trend will continue, which in turn, creates “irrational exuberance”. The justification of elevated prices is supported by others believing this instance is different from the past, ignoring fundamental valuation methods of said asset. This “herding behavior”[7] continues to drive prices until new information is presented. Pessimism then sets in driving the assets price back to or below its perceived intrinsic value.

To solidify these new ideas, let’s inspect a possible example of such “irrational exuberance” – bitcoin. On January 1st, 2017 one bitcoin was worth $997.73 and by December 17th, 2017 it topped out at $19,289.79 returning an astonishing 1,833%[8] return! Since the peak, bitcoin has declined by roughly -78%[9] and, depending on the article, has the possibility of becoming worthless. Based on our three simple characteristics, bitcoin seems to fit the definition of a bubble: 1.) bitcoin is the asset; 2.) its price rose rapidly above its perceived intrinsic value[10]; 3.) since its peak, its price has declined significantly. To further our examination, let’s run bitcoin through Shiller’s feedback loop explanation.

1 – “If asset prices start to rise, the success of some investors attracts public attention that fuels the spread of enthusiasm for the market.”[11]

As Schiller states, the first inclination of a bubble is the successful performance of an asset, which drives other investors to invest in the asset thereby increasing demand and increasing the price. On August 18th, 2010 one bitcoin was worth $0.07 and on December 30, 2016 (roughly six years and few months later) one bitcoin was worth $952.16. At the beginning of 2017, individuals started taking notice of this miraculous return, hearing about friends of friends getting into bitcoin when it was priced at $10 and their friends buying in at $600. These stories began to swirl driving investors to buy bitcoin, which in turn, bid up the price.

The success of others led investors to the second phase of Shiller’s explanation. In 2017, articles about bitcoin and its returns began to consume the news. For example, Chart 1[13] represents over a five-year period how often people searched for “bitcoin” on Google overlaid with bitcoin’s price. As one can see, the search interest in bitcoin follows the rise of bitcoin’s price. 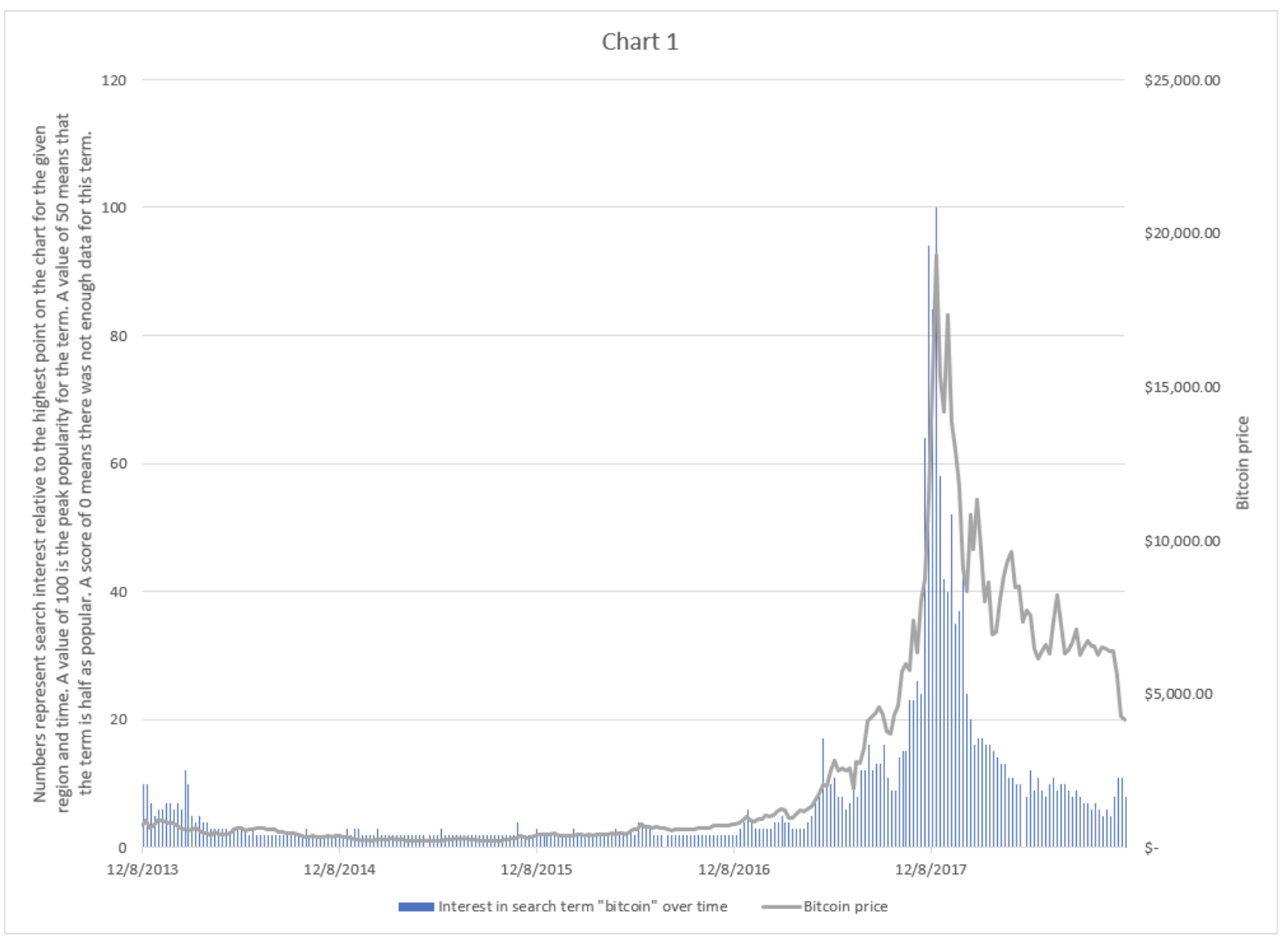 Furthermore, by the end of 2017 we at LBW began to have conversations about bitcoin on a consistent basis not only at work, but also through our personal networks. Individuals from all industries wanted to know our take on the asset and if they should begin to invest. These discussions even progressed to speaking about other cryptocurrencies and initial coin offerings (ICOs) that were supposedly going to be the next “bitcoin”. The news lead investors to extrapolate the price of bitcoin believing its price would only continue to increase.

3 – “The market’s meteoric rise is typically justified in the popular culture by some superficially plausible ‘new era’ theory that validates the abandonment of traditional valuation metrics.”[14]

The higher future price was justified by Shiller’s idea of “new era” thought. When reading, or speaking to others, the discussion consisted of examples like “it is a new form of currency and will displace the dollar” or “this is a technology never seen before and will change the course of monetary transactions’ history”, which essentially abandoned the fundamental way of valuing such an asset.

4 – “But the bubble carries the seeds of its own destruction; if prices begin to sag, pessimism can take hold, causing some investors to exit the market.”[15]

Lastly, bitcoin “carried its own seed of destruction”[16] as illiquidity, regulation, and the overall usefulness of bitcoin running into hurdles lead to a significant price decrease from its all-time highs.

We are not trying to argue that bitcoin still is or was a bubble, the goal was to use Shiller’s line of thinking and apply it to a real-world example – bitcoin just seems to fit this elegant line thinking. As one can see, Shiller’s line of thinking provides us with a framework to identify and evaluate if an asset is exhibiting bubble-like tendencies. This thought process can help one avoid the destruction once the bubble pops. To simplify we can look for the following characteristics:

Having a clear definition of a bubble, other concepts can be applied to this framework to discover if bubbles are in existence or are expected to be. Is index investing currently in a bubble? Perhaps the cannabis market is in the early stages of a bubble? Could companies experience a future bubble with regard to their debt obligations? This line of thinking does not bode well for the Efficient Market Hypothesis, so one must do their own due diligence to be sure. Regardless, if all three of these boxes can be checked…investors beware!

[10] Some argue that bitcoin is worthless as its value is predicated on what others feel it is worth.