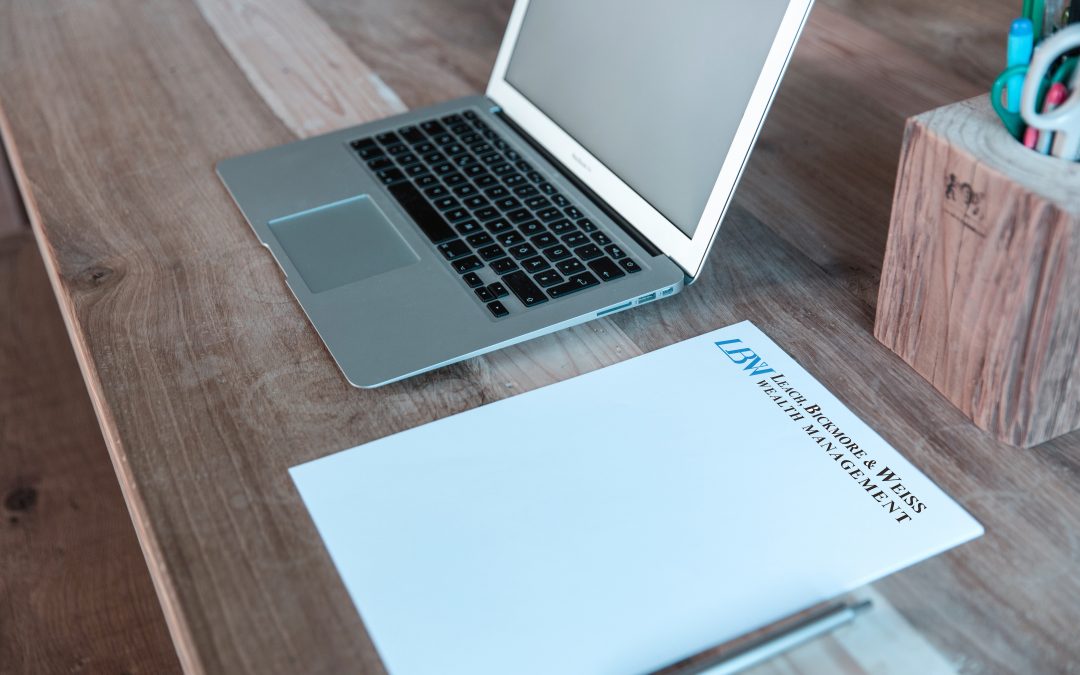 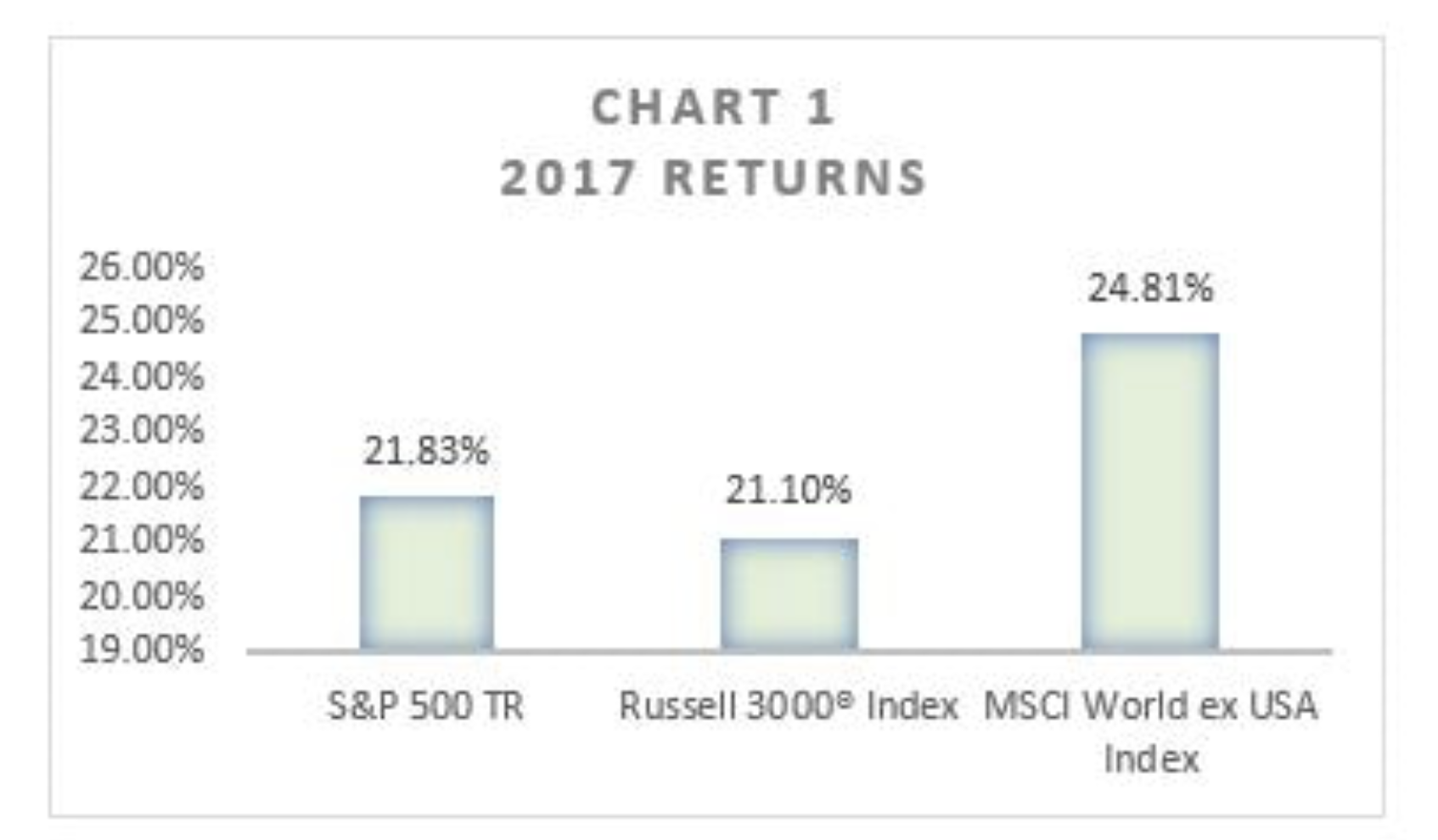 Across the globe, markets climbed higher. Both the S&P 500 (“S&P”) and the Dow Jones Industrial Average (“Dow”) hit record highs within the year, and international markets witnessed the growth many pundits have been calling for the past few years. Furthermore, these returns pushed the U.S. bull market into its ninth year[2]. As many of our readers know, LBW focuses on long-term investing where long-term starts at 10 years. So, let’s shift gears and examine the past 10 years of the S&P 500 TR’s returns in Chart’s 2[3] and 3[4]. 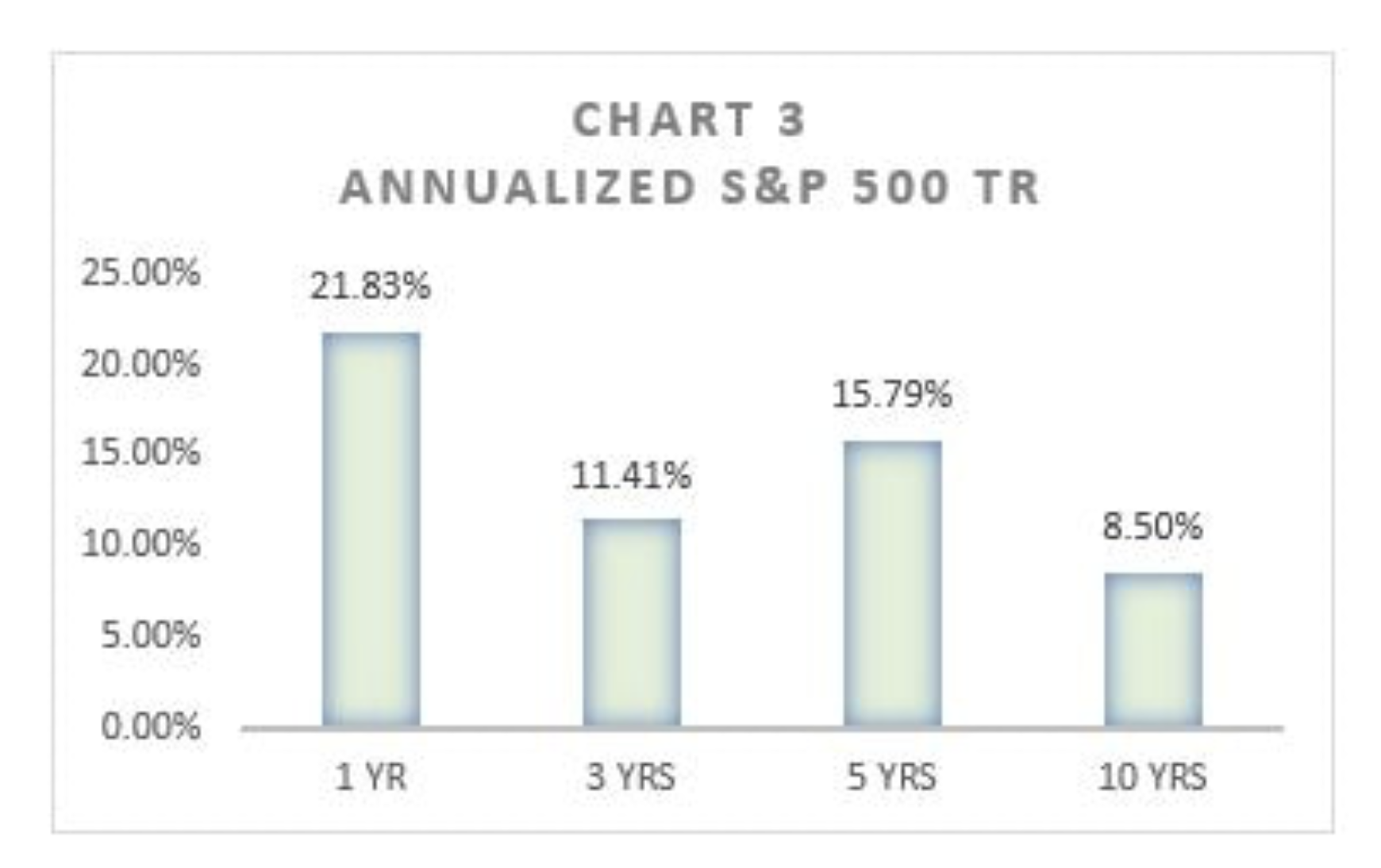 Over this time frame, the S&P 500 TR has had an 8.50% annualized return and has had a cumulative return[5] of 126%[6]. To place this into perspective, depending on how 2018 goes, the 10-year annualized return for the S&P 500 TR should see a significant increase as 2008, which posted a negative -37.0% return, will roll off and will not be included in the 10-year annualized return metric, and thereby exemplifying the extended bull market we have witnessed over the past nine years. Furthermore, these metrics begin to help paint the picture of 2017 and its potential for irrational exuberance[7].

Irrational exuberance can be defined as “unsustainable investor enthusiasm that drives asset prices up to levels that aren’t supported by fundamentals.”[8] For 2017, we witnessed an array of events we feel have inched us closer to an irrational exuberance mindset. For example, for years following the Great Recession many market participants sat on the sidelines worrying that the bad times were only in the early innings. Fast forward to today, the sidelined money has come back as returns have been nothing short of good. The key is not that money has reentered the market assisting the climb in asset prices (although this is a factor), but the anchoring[9] that may be occurring with the new return profile. When the Great Recession was in full effect, market participants anchored on the negative returns causing them to exit the market. In other words, market participants saw negative returns and assumed they would stay there forever. As time went on the markets climbed back, and now we have witnessed one of the longest bull markets in U.S. history. Once the annual return for 2008 is removed from the S&P 500’s TR 10-year annualized return, the new return profile will most likely cause a sense of security, and market participants may assume returns like 2017’s should be expected going forward.

Interest rates are another factor to consider when examining the tilt towards irrational exuberance. Since the beginning of 2008, the 1-year U.S. Treasury rate has declined by -47%, the 10-year by -41%, and the 30-year by -38%[10] due to Quantitative Easing and other monetary policy levers. Artificially lowering interest rates was a tool to boost the overall economy and help the U.S. climb out of the Great Recession. This seems to have helped the markets; however, it may be forcing investors to take on more risk for smaller returns. For example, let’s say an investor is looking to invest their money in a place where they could receive a modest yield of 6%. As seen below in Chart 4[11] they wouldn’t even be able to achieve their goal if they invested in the High Yield[12] bond market.

Fiscal policy in 2017 was another sign of setting up an irrational exuberant path. The topic topped the headlines as the new administration overhauled tax legislation, with big benefits going towards corporations and moderate tax relief for individuals. The thought was to tax corporations less in order to allow them to grow, create new jobs and provide working Americans with more discretionary funds in hopes that they would spend more money on discretionary purchases. This will most likely provide a short-term boost to the economy, and has already pushed asset prices higher. In addition, the new administration has been upfront about its pro-business agenda, and are looking to deregulate industries such as the financial sector. This deregulation could allow for banks to revert to their loose-lending ways by incentivizing them to veer towards short-term profit endeavors. Furthermore, unemployment is at one of its lowest levels in over 10 years and companies are having a hard time finding talent. The job supply could be lulling individuals into a false sense of security, with them thinking that unemployment is a thing of the past.

The cryptocurrency craze of 2017 is another factor leading us to think irrational exuberance is starting to show its face. Bitcoin’s price, one of the mainstream cryptocurrencies, increased 1,204%[13], meaning you could have turned $100 into $1,304 in one year. However, this craze was based on speculation as Bitcoin is only worth what someone is willing to pay for it (the “greater fool” theory). It does not produce cash, nor does it have an intrinsic value (if you want to know more about LBW’s thoughts on cryptocurrency, read our blog post “Cryptic Currency”). Bitcoin’s decentralization, capped unit amount, and blockchain technology are all reasons to think that our perception of payment processing and fiat currency may need to change. However, it is too early to tell and is still highly speculative. Having individual investors join in such a frenzy may indicate people might be looking for higher returns, have more disposable cash to invest, or are becoming more comfortable with the markets in general. These are some of the very factors that indicate irrational exuberance.

If you take each factor: interest rates potentially staying at artificially low levels, short-term stimulus from tax legislation, deregulation, low unemployment, positive market participant sentiment, and then throw on top the potential increase in the S&P 500 TR 10-year annualized return as 2008’s returns fall off, we may begin to see market participants drive further into irrational exuberance’s depths. This hype could drive our nine-year bull market into a 10-year streak further inflating asset prices to new levels. The issue: our perception hinges on future market returns based on past events and results. This simple point could lead us into new market heights; however, that does not mean the price is equal to the asset’s value. Only time will tell how far we are into the cycle of irrational exuberance.

Artisan Partners was started in 1994 by Andrew & Carlene Ziegler. On March 7, 2013, Artisan Partners began publicly trading on the New York Stock Exchange. They saw an opportunity to hire great talent to take advantage of the trend toward open architecture investing platforms. Artisan is structured with small, autonomous teams that are each focused on their respective investment spheres. We have especially like the Global Value team for their International Value & Global Value funds and their portfolio managers David Samra & Dan O’Keefe.

David Samra & Dan O’Keefe have been working together since 1997 when they met one another at Harris Associates, the advisor to the Oakmark Funds. After they moved to Artisan, they both received Morningstar’s 2008 & 2013 International Stock Fund Manager of the Year award. They and their team are generalists, versus focusing on industries, and look for cheap companies with great business models and solid balance sheets that are run by good management. We like them because of their critical thinking acumen, defined processes, and unwillingness to veer from their knitting, so to speak.

Liberty Ventures: Opportunity to Invest in Two Compounders at a Discount

As mentioned in our updates, I presented one of my best ideas for the MOI Global membership community. MOI was kind enough to allow us to distribute my presentation to our clientele. Unfortunately, we have not yet received the link, and will not be able to share within our commentary as we had hoped. However, we should be receiving it soon and instead of delaying your reports any further, we have decided to send a follow up with the link attached. Until then, below is a preamble to my presentation.

Liberty Ventures trades as a tracker of the company Liberty Interactive and is scheduled to be split off as GCI Liberty in 2018. It has in the past been an investment incubator for the companies that owner-operators John Malone and Greg Maffei have invested in over the past decades. They have slowly streamlined the tracker, splitting and spinning off companies as they near fruition. Nathaniel believes that Liberty Ventures offers an opportunity to invest in two compounding companies, Charter Communications and General Communications, at a discount, with a long runway for investing large amounts of capital at high incremental returns.”[14]

[7] The term is thought to be coined by former Fed Chairman Alan Greenspan during his speech titled “The Challenge of Central Banking in a Democratic Society” at the Annual Dinner and Francis Boyer Lecture of The American Enterprise Institute for Public Policy Research, Washington, D.C. December 5, 1996.