The Federal Reserve and Its Tool Box 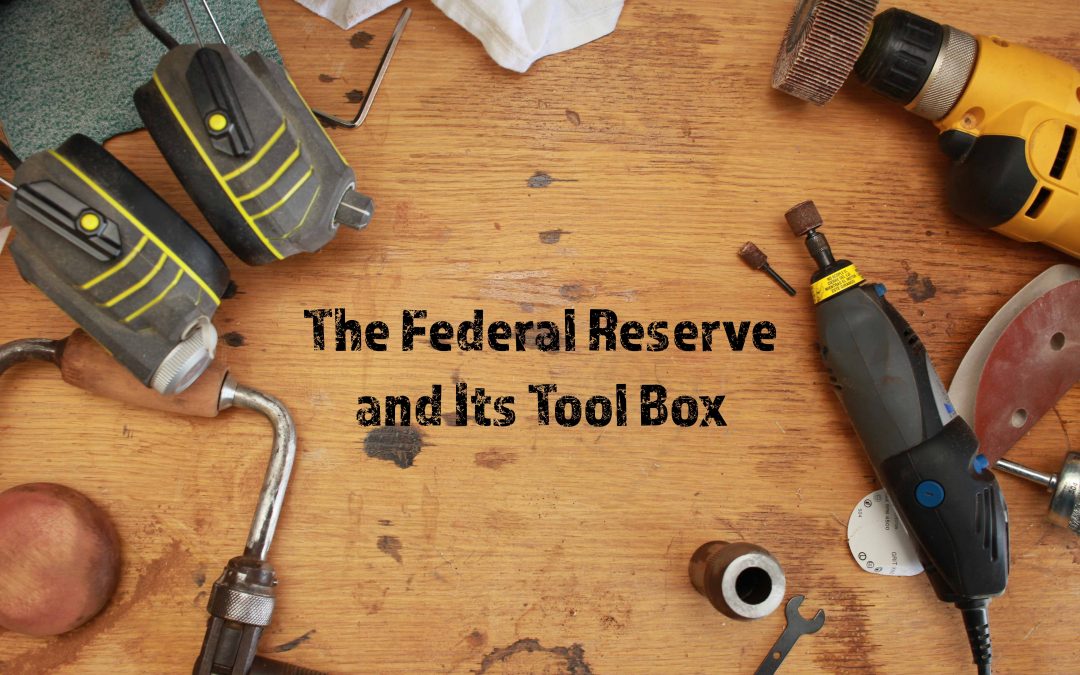 Since the 2008 global financial crisis, central banks have assisted and stabilized their respective countries through loose monetary policy. Fast-forward to today and central banks are still sitting in the limelight with investors and others reading and anticipating what their next moves will entail. For this month’s blog, we wanted to address the United States Federal Reserve’s (“Fed’s”) monetary policy and the role they play as it relates to the economy.

For the Fed to achieve their stated objective of maximum employment and stable prices, they utilize different tools such as increasing or decreasing the federal funds rate and/or conducting the buying or selling of securities on the open market, known as open market operations[3].

The federal funds rate is the rate at which banks and credit unions lend reserve balances to one another overnight. The reserve balance is the amount of cash institutions are required to have on hand, which is determined by the Fed. If a bank were to loan money out and that loan dropped the banks’ reserves to a point where they were not in compliance, a different bank could then lend them reserves to satisfy the requirement. The interest rate used for this overnight loan is the federal funds rate.

Open market operations are where the Fed will buy or sell U.S. government securities on the open market to either increase or decrease bank reserves, which applies either upward or downward pressure on interest rates. For example, from 2008 to 2014, the Fed bought long-term securities to put downward pressure on long-term interest rates with the intention of stimulating the economy.

When banks lend to each other, the rate being charged directly affects the rate the bank will either give to their deposit accounts (interest rate on savings) or loans such as mortgages. For example, if a bank gives out a loan and reduces its reserves to a level of noncompliance, then they will have to cover the cost of borrowing overnight. If the Fed decreases the overnight borrowing rate, banks can lend more freely to others because of the cost of supporting said debt decreases. Indirectly, this may incentivize banks to lend more and charge a lower rate to lend. These lower rates could attract more customers, as the overall cost to borrow has been reduced, creating more lending and consumption. Furthermore, if the interest they are receiving is low, then it may force the consumer to place cash in alternative interest-bearing products to achieve a higher yield, driving up the price of said asset. Also, if the Fed increases the federal fund rate, the opposite could happen. Higher rates mean higher lending costs, making it more difficult for consumers to borrow. Furthermore, higher interest rates on savings accounts may reduce flows into other assets as the higher interest earned could meet the need of the consumer. These factors could slow consumption, cooling the economy down.

Simply put, the Fed can affect the consumption of the U.S. both from a business and personal perspective, and because of that, investors hang on to every word they say. Another tool at their disposal is forward guidance on the implementation of their monetary policy. This was put into place after the Great Recession. Forward guidance helps provide the general public, and investors, with information on what is to come. As we have written before, the market is a seer and will use this information to forecast the potential prices of investments. For example, when the Fed came out recently and stated they may cut rates citing trade and global growth concerns, the markets popped as further easing indicated potential tailwinds, even though the reason they were thinking of cutting was due to concerns in growth.

Our economy is dynamic and truly is a complex system. To say the Fed is the only thing to pay attention to as it relates to macro movements is not something we would agree with. However, understanding the relationship is important as the toolbox at the Fed’s disposal is vast and has real effects on our overall economy. Even though the Fed may adjust a few different things within our system, as we explained above, their actions create a ripple effect. The ripple effects have a direct impact on the general public. With that said, the loose monetary policy that has been implemented over the past decade is new. The Fed is currently writing history, and the U.S. will not know the second or third-order effects of such a policy for some time. If the Fed continues to lower interest rates and buy securities, don’t be surprised if the markets react favorably. However, don’t be surprised if the markets reverse over time as well, because at some point we all want to see a stable economy, which means we need to see the Fed tighten.

[3] For this blog, we will discuss these two policy tools. For other tools used by the Fed see: https://www.federalreserve.gov/monetarypolicy/policytools.htm