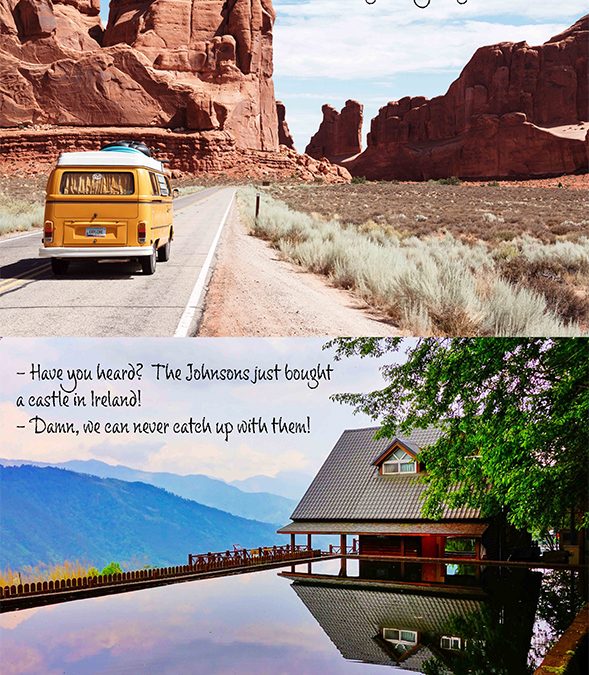 If one were to participate in an LBW company meeting, they would most likely hear a conversation surrounding Charlie Munger’s concept of mental models. Munger believes one should study and understand the fundamentals of multiple core subjects, such as math or physics. Fundamentally understanding these subjects allows an individual to connect dots across said subjects developing new mental models allowing them to solve an array of problems. This month’s blog is taking Munger’s mental model concept and applying it to one of our three core services, financial planning, and how we feel there should be a theory of relatively for wealth.

In the early 1900s, Albert Einstein stunned the physics world with his theory of relativity. He developed two core theories: the special theory of relativity and the general theory of relativity. Einstein theorized there was no fixed frame of reference in the universe, and everything is moving relative to everything else. One of the famous thought experiments to help explain such a concept is the story of two twins. One twin stays here on earth while the other gets into a rocket ship that travels close to the speed of light. Each has a watch and times how long it will take for the twin in the rocket to come back to earth from their travels. Because the twin traveling is moving close to the speed of light when they return the time it took them to travel millions of miles may have only been a few days, while the lapse of time for the twin on earth may have been multiple years. Again, time was relative to the rate at which the twin was or was not traveling.

What is interesting about this concept is the point of relativity. This concept can be directly related to wealth. The conversation surrounding wealth is misunderstood. When someone asks us what it takes to be wealthy, we respond, “do you want to be rich or wealthy? Because these concepts are vastly different.” Rich is absolute – to be rich, one must have a large amount of money. Whereas wealth, in our opinion, is a relative term – to be wealthy, one doesn’t necessarily need a large amount of money; it is relative to their lifestyle.

Most people think rich and wealthy are synonymous with one another, leading to our statement being argued away rather easily. However, if we were to call someone rich vs. wealthy, it may cause a different reaction depending on the word choice. Rich comes across as flashy and affluent; it is the person driving the nice sports car with a mansion on the lake. Whereas wealthy seems to be more sustainable and has a less aggressive tone; it is the person you would never suspect or know had money. Even though the two words can be interchangeable, they derive and perpetuate a different feeling when used. In our opinion, we feel this is the case because wealth seems to encompass a feeling of sustainability. If we are correct, then wealth can be a relative term as sustainability can have a different meaning depending on the household.

A large part of our job is to dissect and analyze the sustainability of our clientele. Over many conversations, we begin to evaluate and understand what our clients truly want in their lives. It can range from Client A wanting to live in LA and travel the world in luxury, while Client B may want to buy a sprinter van and travel the U.S. Both cases will take different sums of money to achieve each goal; however, our objective remains the same: ensure each client can achieve their goals sustainably. If we can achieve our objective, then both clients will be wealthy as they will have enough resources to sustain them over their lifetimes. However, Client A, due to their lifestyle choice, may be considered rich, whereas Client B may not.

The concept of wealth being a relative term can be impactful – it allows for customization and perspective as it relates to money. Due to societal pressures and the “Keeping up with the Kardashians” effect, many households can become discouraged or get down on themselves as they feel they can never achieve true wealth. If one were to change their mindset and understand wealth is relative to lifestyle, the focus turns from looking at others to understanding one’s household desires. This allows them to create and develop realistic goals and opportunity sets. Furthermore, it removes the feeling of instability and creates a feeling of satisfaction.

Like Einstein’s theory of relativity where time and distances are relative to the speed at which you travel when speaking of wealth, lifestyle can be synonymous with speed. Yes, people who have more money will see the world from a different perspective, just as the twin on earth experienced a longer time lapse then the one in the rocket. Even though the twins’ perspective on time changed, it does not mean their goals or objectives changed as well. Grasping wealth in relative terms breaks down the fundamental barriers of societal pressures and places control back in the hands of households allowing them to control their destiny and travel at a speed that suits their needs and perspectives.