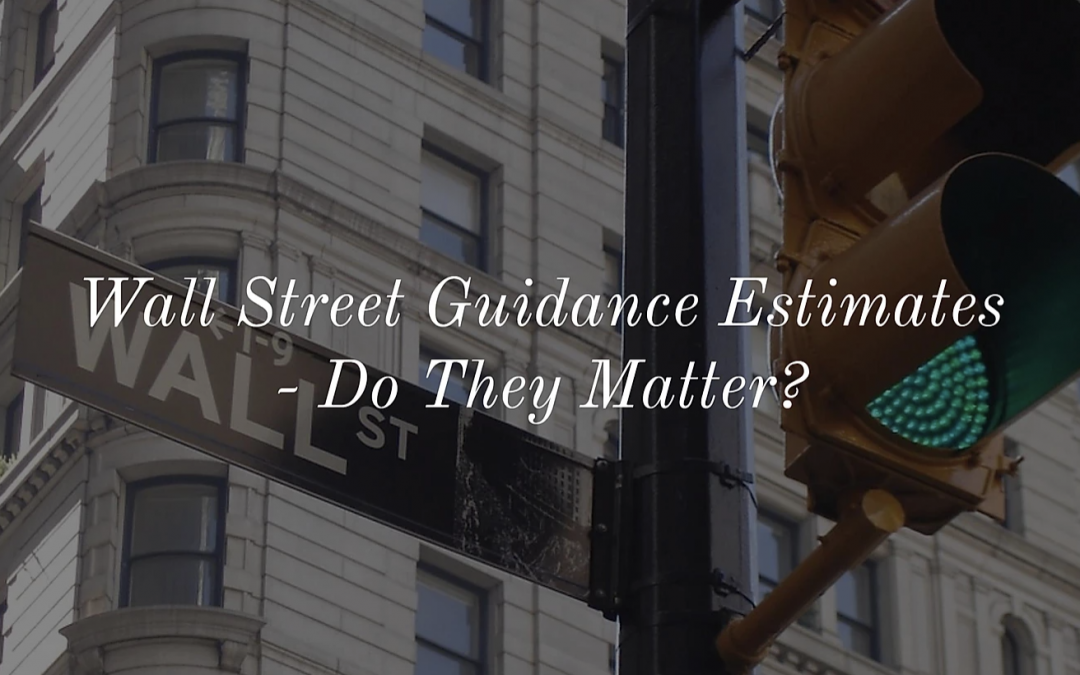 Full Disclosure: I (Nathaniel) am not a Wall Street analyst.

What do you think of when you hear “Wall Street estimates”? Most people vaguely think of sitting at home on their couch, channel surfing on their TV and coming across the CNBC channel. They may hear about a company that has reported their earnings, and Wall Street’s estimates were different from what the company was reporting. Ring any bells? Beyond what you see on CNBC, what do Wall Street estimates truly mean? What effect(s) do they truly have on companies?

During the quarterly earnings season, have you ever watched CNBC as a company’s quarterly earnings are announced? Let us assume CNBC is announcing the earnings for Whole Foods (WFM). It’s a fascinating dance as the CNBC commentator announces WFM’s earnings[1]: 23 Wall Street analysts’ consensus estimates had predicted that WFM would have Earnings Per Share (EPS) of $0.39 and Revenues of $4 billion, but wait…instead, WFM announced EPS of $0.38 and Revenues of $3.9 billion! WFM’s stock price suddenly suffers a sudden five percent decrease, and CNBC begins to comment that because WFM’s EPS had missed by one cent per share, the five percent stock price drop was warranted as the 23 analysts that followed WFM had revised their forecasts and recommended that WFM was not growing per the analysts’ forecasted growth rates.

Let’s take a step back and think about the preceding paragraph for a moment. We at LBW would like to address a few items from the above:

Let’s take these one at a time.

What’s the big deal about these Wall Street estimates?

Our second issue with Wall Street’s estimates is they are typically estimating earnings and revenues two to three years into the future, and some are as short-term as one year or one quarter! Most analysts use Discounted Cash Flow (DCF) estimates in their calculations. As you may recall in our blog post “LBW Commentary Q1 2016” posted May 2nd, 2016[2], we briefly discussed DCF calculations indirectly when we wrote about P/E ratios. As we wrote then, “There are a number of inputs that go into this calculation including discount rate, estimated future ten years’ cash flow growth rate, and long-term growth rate.”. Wall Street analysts have been known to use unrealistic growth rates in their DCF calculations that thereby produce unrealistic forecasts. For example, by inputting into the DCF calculation for WFM a unwarranted high growth rate in the first five years, this can front-load the DCF calculation such that WFM’s intrinsic value appears to be much higher in the short-term when in reality is should be lower and perhaps does not return as high a rate of return as required by the investor. In addition to not as high a rate of return, this also diminishes the Margin of Safety for the investor, which as you may also recall from our blog posts, is a value investor’s downside protection. These are just a few examples of what can and do go wrong with Wall Street’s estimates. As a direct result of these unrealistic inputs in the analysts’ DCF calculations, Wall Street’s estimates have been shown to be more wrong than right throughout history.

In our view, one of the largest advantages value investors have is a long-term investment timeframe. An investor needs to look at investments in terms of at least five if not ten years. Remember, there are 40 quarters in ten years! One quarter is a blip in time with this perspective. Accompanied with an appropriate Margin of Safety when purchasing securities, an investor with these principles in their toolbox is already ahead of most of their competition.

As human beings, it’s our nature to feel safer in a crowd versus being alone, probably because of our ancestors huddling for warmth during bad weather 5,000 years ago. The same goes for seeing the number of analysts covering a certain company: the more analysts there are, the safer we feel about their estimates of a company’s results. Conversely, the fewer analysts that follow a company, the less safe we feel about their estimates.

As we did before, let’s take a step back, then add into the mix our point about what value there is (or isn’t) in Wall Street analysts’ estimates. Does it really matter how many or how little analysts are following WFM? The answer is “No”. So long as the investor does their own research, then the consensus view of the 23 analysts following WFM mean nothing. We cannot say this enough: it is imperative that investors do their own research and come to their own conclusions.

How Earnings and Revenues are Reported in the News

While somewhat minute in comparison to the rest our points, this one continues to rub us the wrong way. Notice how WFM’s earnings are reported on a per share basis (EPS) ($0.38) while their revenues are reported in total dollars ($3.9 billion). Why are WFM’s earnings and revenues headlined by the news’ media in two different metrics? Why aren’t they consistent?

Certainly, one could surmise that EPS is used because a person could take the EPS times four (four quarters in one year) to project one year’s total EPS and then determine a P/E multiple from the market price (remember: P/E = Price/Earnings). But what about revenues? WFM having revenues of $3.9 billion versus $0.38 EPS have no relationship as stated. These two metrics by themselves tell us nothing about the company in addition to the fact that they are just one quarter’s worth of information versus the multiple quarters needed to make an accurate quantitative analysis.

Let’s take this one step further. As we proposed in our introduction, let us assume that Wall Street estimated WFM would have $0.39 EPS and $4 billion, but instead WFM reports $0.38 EPS and $3.9 billion, and the stock price reacts with a five percent decrease. For the EPS, let us assume for purposes of our example that WFM has 100 million shares outstanding; that means that WFM’s actual earnings in dollars equals $38 million. So if Wall Street’s estimates overestimated WFM’s EPS by $0.01 that means that they were off by $1 million. It, in no way, makes sense for a ~2.6% difference in one quarter’s estimates to cause a 5% decrease in WFM’s stock price. One could also make a similar argument regarding WFM’s revenues.

As you can see, there are numerous pitfalls that could lead to poor investment decisions on behalf of our clients if we were to take Wall Street’s analysis at face value. Wall Street guidance has been known to be consistently wrong, the number of analysts following a company has proven nothing with regards to the analysts’ consensus estimates being correct the more analysts there are, and the headlines you see flashing across CNBC’s screen are typically opaque enough to cause the investor to wonder what the big deal is as the company’s stock price decreases by what appears to be an excessive percentage for no apparent reason. Remember, a company’s market price is not indicative of its intrinsic value, it is a barometer of market sentiment, which happens to include Wall Street analysts’ influence via their reports.

While we do occasionally review analyst reports we do not use their contents to make the final decision whether to invest our clients’ money in a security or not. The overall point we wish to convey is simply that we do our own research with the mindset of investing for the long term, and will continue to do so.

[1] The following numbers used for WFM’s earnings and revenues are not the ones announced for their fourth quarter, and are used for example purposes.